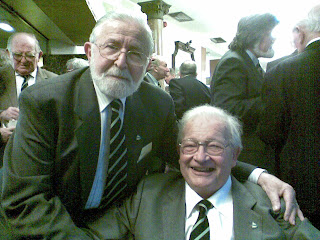 One of the joys of spending a lot of time on the internet is when you get a letter such as this one, which arrived in my e-mail box the other day:

I don’t know if I may have the wrong name but my late father used to mention a very good friend named Sidney Tabor who was in the ‘Phantom’ regiment during WWII. I noticed your article and wondered if it may be the same?
With kind regards
Kevin Holdaway.

The short story is that the writer of this letter has now been put in touch with our much respected Syd Tabor and I have learned, for the first time, of Syd's very impressive wartime background.

The photos show Syd & I at the 2008 Club re-union and Syd (central) with his Phantom unit friends, including (with the pipe) Ted Holdaway, the late father of Kevin Holdaway.