Since posting the article below I have received the following details from Maxie:

Maxie goes on to write as follows:

Ron was Club Leader at the Virginia Rd School premises approximately 1950-1956 when we came under the GLC.

He was a very quiet man and well respected both by the management committee and the boys who came under his wing. He organised camps at Shackleford and Badger Hall, hikes and holidays abroad and kept things going very efficiently until his departure to Birmingham when David Greenhalgh (Weasel) took over from him

Apart from being Club Leader, he was a personal friend to all the other managers which at the time included Leslie Addinson, Ralph Young and myself.

He was badly missed when he first moved to Birmingham and now he will be sorely missed by all who knew him.

He was indeed a very lovely man.

Max Lea MBE
Posted by Ron Goldstein at 04:17 No comments: 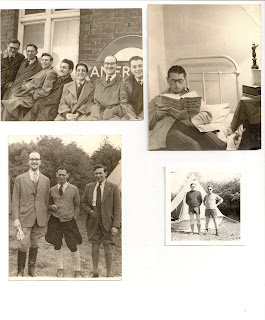 I have recently been in correspondence with Liz Fellman who has regretfully informed me that her dear father Ron Fellman has passed away during the past weekend.

Liz has also sent me the attached photos and comments that are self explanatory.

Dear Ron
Many thanks for your quick reply, and your kind wishes
I am attaching a scan of 4 photos from my father's younger days. My father is 2nd from left in the group photo at the station , in the centre of the group of 3, and on the right hand side of the two in front of the tent. I hope they come out ok - I just had the borrow a neighbour's scanner!
If you were able to post the photos on your blog, that would be very kind of you. I would be interested to see if anyone responds and has any information about what my father was like/what he did during his time with the Boys Club.
In addition to some issues of the Boys' Club annual report, I have also found a menu/toast list for the Holland-on-Sea Camp Banquet for Saturday 7 August 1954. my father is listed as Chairman, and giving the toast to the Queen.
I dont know if this will help you work out the time period my father was involved with the club?
Liz Fellman
Posted by Ron Goldstein at 03:13 No comments: