MAX LEA, MBE, 50 years RA Membership Congratulations to Max Lea, MBE who will receive the Referees' Association 50 year continuous membership award from his friend and colleague Peter Molyneaux at the April Society meeting. Here is a snap-shot of his involvement with football and refereeing over 60 years. Best wishes from all your colleagues! Gordon Kirby, JP, Chairman I 1941-88: Played cricket and football with Cambridge (Bethnal Green) Boys Club, Although the club folded in 1988 old boys continue to meet annually for a dinner; From 1950 Old Parmiterians FC playing football and cricket and refereeing; Qualified as a referee in1962 and still a member of the RA; Became an AFA Committee member in1970 and also representative on the London County Committee of referees; AFA and Society Training Co-ordinator 1988-1997; Helped to collate and despatch ARGUS magazine from 1970-1991; Society delegate to the Southern Division of the RA 1975-97; Received RA LMSA at RA Conference in Cardiff 1992; Became Society Life Member 1992; Became AFA Council Member 1976, elected Life Vice President 1990; AFA Assessing Secretary 1973-89; 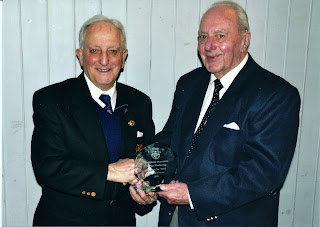