One of the joys of running this blog is to receive the odd letter from the offspring of club members who are no longer with us. Such as the following:

Ron, I've been going through some of my father's papers, and came across his ticket for the 1987 Cambridge Reunion. I then did a Google search and found your blog site, with the guest list for that same event: http://candbgoldboys.blogspot.co.uk/2007/02/guest-listclub-reunion-november-12th.html My Dad, Dave Shade (né Shreibman), appears on Table 4, and his cousin, Morry Graham (né Gitovich), is listed on Table 6 with his two sons Ralph and Mark - although there is a ring round their names, I'm not sure why. My father died in 2004, aged 93, and remembered his club days to the end, as did Morry (d 2009, aged 92). I recognise the names of one or two of his friends in the 1987 list, and elsewhere on your site. I have a few photographs of him involved in what could be C&BG activities, including one of a group in athletics (or boxing?) strip, with the club badge on the chest. The photos appear to be from the period late 20s-early 30s. Maybe if I email you the photos you could confirm whether they are of the C&BG club? And if any of them are, please fell free to use them on the blog site, as you see fit. Many thanks for what you are doing to keep the memories of the club and its contribution to East End life alive. I hope you are keeping well. Best wishes, Michael Shade

Since then, Michael has sent me this wonderful photo: 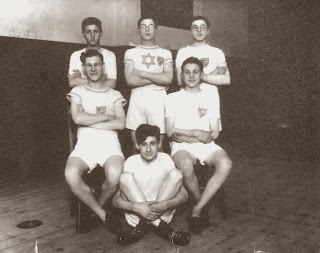